Skip to main content
Home Activities IN A SEMINAR IN AAUP: PHILOSOPHER NOAM CHOMSKY TALKS ABOUT THE DEVELOPMENTS IN THE INTERNATIONAL AND LOCAL ARENA AND ITS IMPLICATIONS

IN A SEMINAR IN AAUP: PHILOSOPHER NOAM CHOMSKY TALKS ABOUT THE DEVELOPMENTS IN THE INTERNATIONAL AND LOCAL ARENA AND ITS IMPLICATIONS 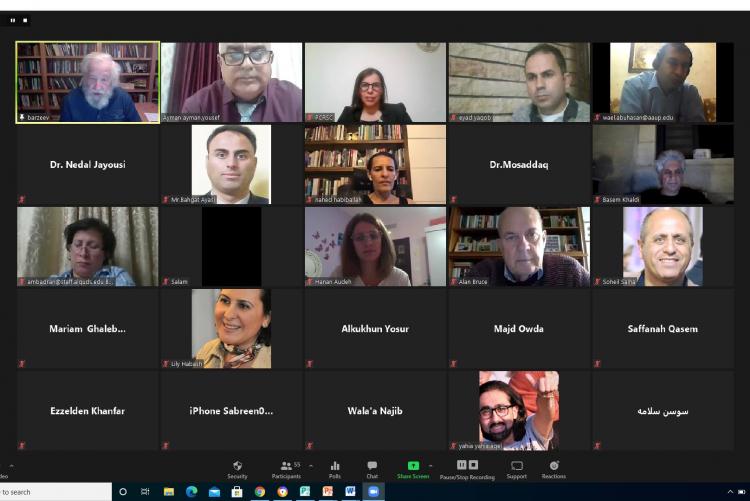 Ms. Rula Shahwan- the Policy and Conflict Resolution Studies Center Manager started the seminar by introducing the center and its mission in providing academic and cultural knowledge to create intellectual dialogue between the different parties in the Palestinian society and international thinkers and philosophers to discuss the changes and developments happening in the local and international arena and its implications on the Palestinian cause.

The seminar was moderated by Dr. Ayman Yousef- a Professor in Political Sciences Studies in AAUP as he first welcomed the guests and expressed his pride that the center in Arab American University hosted this lecture. He introduced the global philosopher Noam Chomsky and said that he is one of the most prominent philosophers and intellectuals in the modern era, who studied Philosophy, Logic and Linguistics in University of Pennsylvania where he developed his great interest in philosophy. After finishing his studies, Chomsky joined Massachusetts Institute of Technology for 50 years and participated in the anti-war protests and he is known for his fierce criticism of imperialism, capitalism, Zionism, and many American policies toward the war on Vietnam, Iraq, and Nicaragua.

Dr. Ayman also said that this seminar will mainly discuss the American elections and its consequences, especially in the current circumstances of the policies of Donald Trump and its implications on the Palestinian cause under the happening normalization between Arab countries and Israel.

Philosopher Noam Chomsky in his speech talked about the different determinants that control the international and foreign American policy and said that “the foreign American policy, just like other countries, is primarily driven by the dominant domestic forces that are the main drivers of foreign policy in general. One of the important drivers is the economic relation with the Middle East, and the main determinant for this policy is Oil”. He indicated that the American wars on the Middle East were to keep its oil interests safe, especially in its war on Iraq, which_ from Chomsky's point of view_ was a major cause of the creation of radical groups such as ISIS that negatively affected stability in the Middle East.

In his response to Dr. Nahid Habiballahh- a Social Sciences Professor in the Faculty of Graduate Studies question about using religion to justify many of the internal policies of the United States, Chomsky said that Trump uses religion publicly to achieve political interests that claim that God sent Trump to protect Israel from Iran, and that Trump seeks to win the largest number of supporters, especially from the Anglican Christians. Chomsky also added that what is happening now in the local internal American policy is a unique thing that never happened in the history of the US, as when President Trump declared that he will not accept the election results if he loses and that he will challenge the electoral process is something reprehensible and strange for American society and threatens instability in American society.

Chomsky also talked about WikiLeaks and said that he considered them “revealing and interesting” and mentioned that we should know the bases of the exceptional relation between the United States and “Israel”. He explained that the internal US document of the Pentagon, which listed the strategic priorities of the United States, and the most important areas in the world that must be protected at any cost, included “Haifa, Rafael military industries, and large advanced military industries where unmanned aircraft technology was developed.”

In addition, Chomsky said that the relations between the United States and the high-tech Israeli military industries are so close that "Rafael" moved its headquarters to Washington, where the money is. He added: “Israel is now a small entity but it owns a high-tech industry, and it plays a major role in oppression and aggression”.

A diverse academic presence was in this seminar who attended from the different Palestinian universities and representatives of the civil society, as the guest was asked many questions from all attendees including students of the Faculty of Graduate Studies in Arab American University. 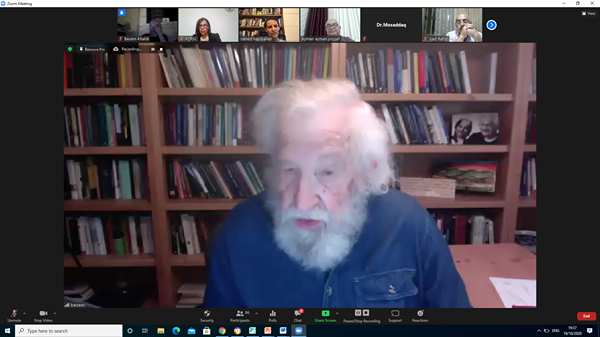