The Policy and Conflict Resolution Studies Center in Arab American University has organized a seminar through Zoom about “The Acceleration of Arab Normalization with the Israeli Occupation”, the reasons and repercussions on the Palestinian cause. 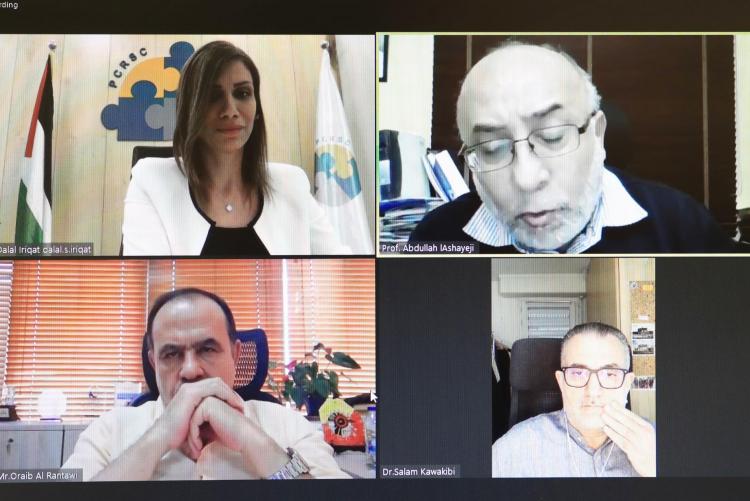 Participants discussed the noticeable development in the Arab-Israeli relations which developed from being secret to overt normalization, in addition to the expanding to some of the societal groups and political groups and reaching to include some lecture, political and economic sectors, especially in light of the recession of the Arab and international support to the Palestinian cause.

The seminar was opened by Ms. Rula Shahwan- the PCRSC Manager as she welcomed the guests and asserted on the importance of this seminar that will spot some light on normalization, its reasons and repercussions and the expanding in the Arab and Palestinian understanding of normalization. She also indicated that this seminar is one among the center activities that aims to be a Palestinian and Arab platform to express free and critical opinions in Palestinian, Arab and global causes and issues, but especially the challenges that face the Palestinian cause.

Dr. Dalal Iriqat- a Faculty Member in AAUP and a member of the Board of Directors of the PCRSC moderated the seminar and welcomed the participants. Dr. Iriqat asked some questions to participants to answer and clarified that this seminar will focus on normalization relations in general. She said: “Nowadays, we witness a case of removing psychological barriers between many countries which started to build relations with Israel, without considering the inalienable Palestinian rights according to the International Law”.

Dr. Iriqat added: “We witness a promotion to what is called “Outlook to the Future” away from the conflict history, as countries are now adopting strategies for the good of their interests based on the pragmatic thought, while the Palestinian strategy is still stick to diplomacy, legality and international law”.

Dr. Salam Alkawakbi- Researcher in Political Sciences and International Relations, the Executive Manager of CAREP- Paris, and a lecturer in University of Paris said: “Arab countries that started normalized relations with the Israeli occupation tried to start also a distortion and hatred feeling among its people against the Palestinian cause. However, it failed in normalizing the popularity’s patriotism with the desire to accept the colonized and the Israeli occupation”. He clarified that the USA has a main role in the Arab-Israeli normalization and it succeeded in its goal because there is no active Arab system and it was never presented in any Arab economic or political cause.

Furthermore, Dr. Alkawakbi indicated that some of Arab regimes wanted to separate the Palestinian cause from other internal Arab causes, and this indicates that the recent Emirate-Israeli normalized relations through a peace agreement comes under the counter-revolution category since Israel wants to be surrounded by democratic states and the democratic changes that are happening in Arab countries that reflect peoples’ desires is never in the interest of Israel. He also clarified that the Arab regimes that supported the revolutions was not supporting it because they liked it, but they wanted it to be transferred into violent revolutions, in order to make people hate revolutions and to establish in their minds that the current authoritarian regimes are the only and best solution in Arab countries, just like what happened in Syria.

Mr. Oraib Al Rantawi- Manager and Founder of Al-Quds Center for Political Studies in Amman and Beirut and a Columnist in Al-Dustour Newspaper talked about the Arab-Israeli normalization and said: “the already happening normalization is different than the previous normalization that used to be only for what so called the ring countries that were in the Arab-Israeli war and had some occupied lands and had some peace agreements with Israeli such as Jordan, Egypt and the Palestinian authority, but now the normalized relations now include attribution countries away from Israel like the Emirates.

Mr. Rantawi added: “We are facing a strategic alliance bigger than the normalization. Some regimes are racing to normalize with Israel because they did not come through ballot boxes and are not legitimate, and so they are looking for legitimacy through relations with Israel and the US aiming mainly to protect themselves from revolutions and to ensure themselves to stay in role of the country”. He added: “Some of the countries that had wars like Yemen, wants a safety net to continue this war but they could not find this net in a dying Arab regime, and so they go to Israel to be their bridge to the US and to ask for protection”. Mr. Rantawi said that some suppressive regimes fear future and look for relations with Israel and the US to consolidate their existence, while other regimes are afraid of their neighbors and think that if they go to Israel, this will provide a protection from neighboring Arab countries, such like some countries of the GCC.

He continued his speech saying: “this strategic Arab alliance is founded to continue suppressing the people of the countries, and it is naïve to think that Israel will go in a war to protect Arab countries from Iran. The current alliance between some Arab countries and Israel is only a security alliance that aims to benefit from the intelligence and military possibilities of Israel to suppress opponents, target them, kill them, and bring the Arab peoples to their knees”. He clarified that in Palestine, a democratic liberation project is needed to be connected to the Arab democratic liberation projects that could have an international resonance against racism, extremism and the restoration of rights.

And concerning the resistance to normalization, Prof. Abdullah Khalifa Alshaiji- the Former Head of the Political Science Department at Kuwait University, the Head of the Graduate Studies Program in Political Sciences and the Founder and Former President of the American Studies Unit in Kuwait University said: “Kuwait is proud to be the first country to establish the Council to resist normalization with the Israeli occupation in 1995”, he clarified that Arab peoples from ocean to gulf consider Israel as an alien, a colonized country and a Zionist entity that tried to divide Arab to be against each other, however, Arab and Muslims all see that Israel only exist because of Britain, and that we are paying for such policies in the Arab World from Balfour Declaration to Sykes–Picot Agreement.

He added that: “resistance to normalization is every Arab and Muslim person’s concern like what happens in social media, as we noticed a great interaction with a trend entitled "Normalization is Betrayal" and this indicates that in general the Arab and Muslim peoples agree that normalization with the Israeli occupation is betrayal to the Palestinian cause and Arab principles. Unfortunately, some Arab people started to promote the normalization as if it is a must and they work on the narrative that Israel is a country in this area and that Palestinians should defend their cause by themselves as their cause is an internal Palestinian business, they also mock other countries that still reject the normalization like Kuwait.” He continued by saying that: “Too bad that we have reached this defeatist narrative that tries to justify the normalization by saying that it will only cover the health and technology sectors to benefit from the Israeli expertise scientifically and economically.”

Prof. Shaiji clarified that Arab popularity rise is resistant by nature and will be a strong fortress that will always stand against normalization with the occupation and regimes should understand this and realize that normalization with Israel is a sin that will only bring indignation because it is a free normalization and a ran away from the Palestinian cause that is considered to be an emotional cause in the minds and hearts of Arab peoples.

At the end of the seminar, Dr. Dalal Iriqat- the session moderator thanked the participants and concluded by saying: “Palestine is going ahead with its liberation project and will always be betting on the steadfast of its people on their land, who throughout history have proved that they were able to stand up to the occupation and repel all attempts, because after all it is the Palestinian cause”.

Some interested students and academics from inside and outside Palestine participated in the 2-hours seminar, and a discussion and questions period was given to participants which focused on the needed steps locally and regionally to face the accelerated normalization with the Israeli occupation. 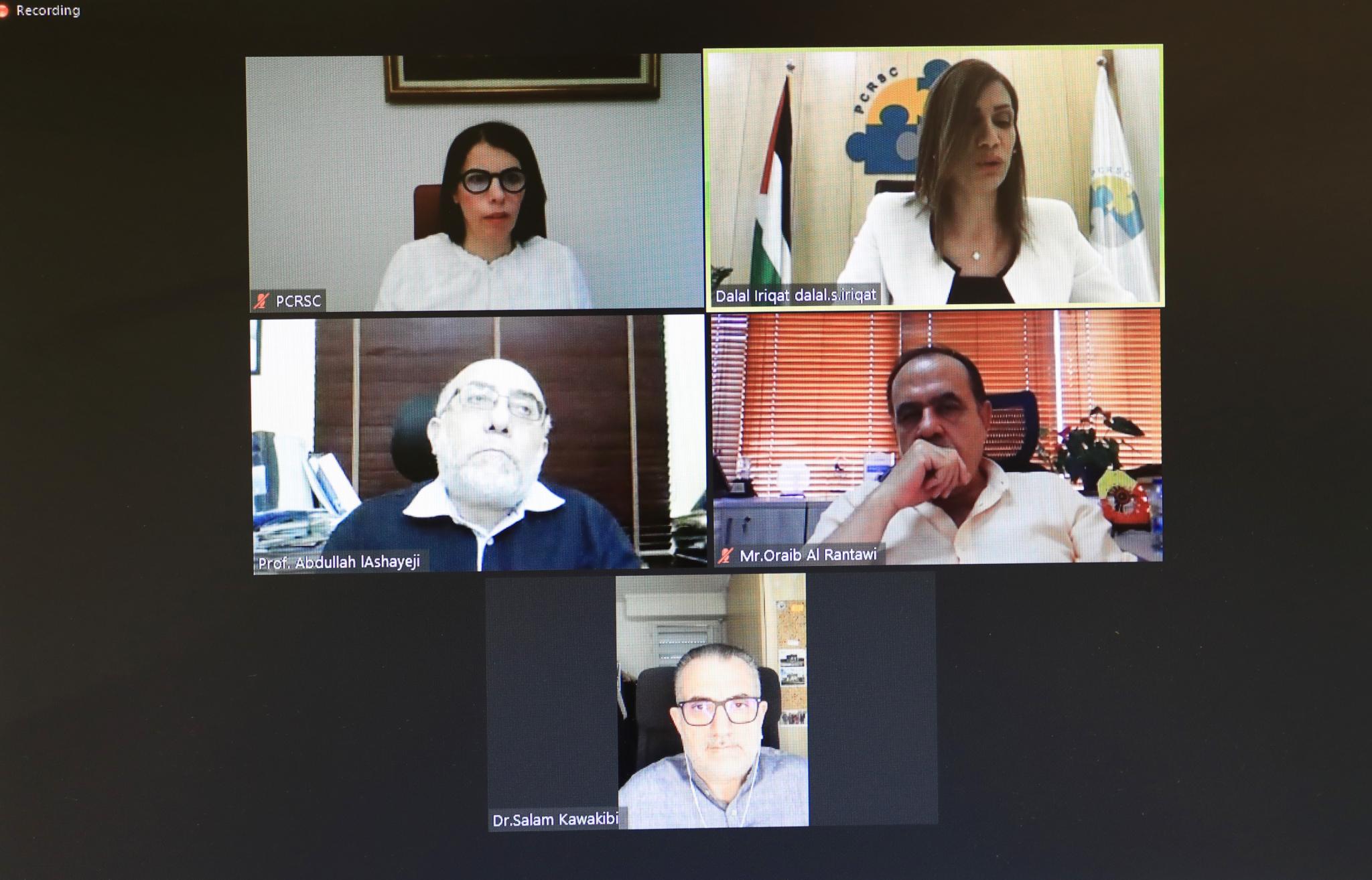