Skip to main content
Home NEWS Freihat …. During His Meeting With Masters Program Students "Conflict Resolution and Development" - Arab American University - Ramallah "the Deal of the Century Has Achieved for Israel What Couldn’t Be Achieved by Negotiations"

Freihat …. During His Meeting With Masters Program Students "Conflict Resolution and Development" - Arab American University - Ramallah "the Deal of the Century Has Achieved for Israel What Couldn’t Be Achieved by Negotiations"

The Policy and Conflict Resolution Studies Center hosted Dr. Ibrahim Freihat who is specialized and a researcher in many international conflicts and the head of the MA program in conflict management and humanitarian work at the Doha Institute for Graduate Studies and Georgetown University. Dr. Freihat presented in his lecture for Conflict Resolution and Development students in the course of Israel and the outside world, presented by Dr. Ayman Yousef the historical development of relations between the Arab countries and the Middle East countries surrounding the occupation country starting from Al-Khartoum Conference 1969 with its three disgrace reaching to the deal of the century. 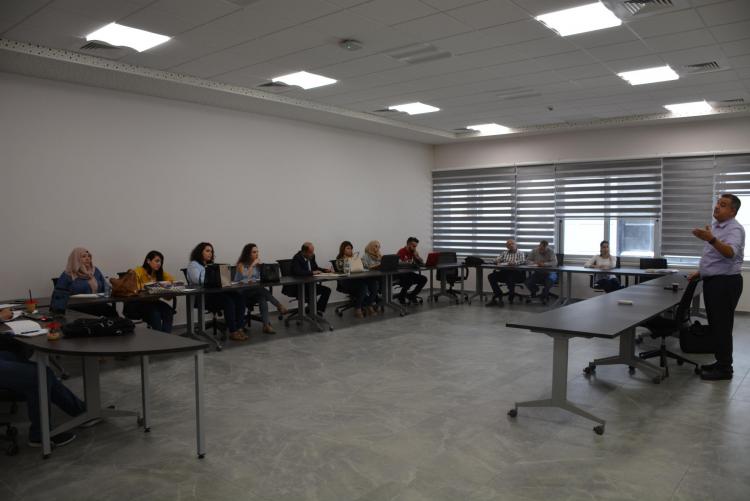 Part of the Lecture

During his readings and analysis of the current political situation of the Palestinian issue within the regional equation and political trends, Freihat assured that the regional alliances based on the policy axes and the position of these axes in the main effective issues in regional politics, including the most important the Palestinian issue. Historically there was the axis of opposition, which includes countries that have a hardline stance with Israel. Moderate axis, which are the countries with pragmatic manner in their position with the occupation state, and with the rise of Arab Spring revolutions, these axes differed to take other dimensions that relate to the positions of these countries from growing terrorism and  radical parties in the Arab world. Dr. Freihat considered that the Arab world currently divided into four axes: (Revolution and changing forces, Reluctance - Syria and Iran, the axis of Turkey and Qatar, and the axis of Saudi Arabia and the United Arab Emirate).

During his speech about the deal of the century, Freihat explained that trumps current government is an economic government aimed to raise funds to implement the deal of the century that achieves for Israel what couldn’t be achieved by negotiations. Noting that it came in alignment with the Israeli current unilateral approach such as building the separation wall and statements prevent refugee returns and occupying the city of Jerusalem.

Freihat assured the legitimacy of the Palestinian case, which stems from its justice and legality. It remains in spite of all the obstacles and crises and the current developments its passing through. The cold war between Iran and Saudi Arabia has escalated, but the Arab regimes still fear their people to speak openly about agreeing to the deal of the century. This justifies by naming the previous Arab summit held in Dhahran in Saudi Arabia in "Jerusalem Summit". He pointed out that the Arabs may disagree on Syria, Yemen and Libya issues, but they always agree on the Palestinian issue.

Several questions were raised by the students and an open discussion on the axes and camps that interact within the Arab region, and the changing the possibilities in the existing axes and the future of the deal of the century and how to impede its implementation.

This hosting is within The Policy and Conflict Resolution Studies Center to attract the academic competency to benefit from their experience, enrich student’s experience, and increase their knowledge through direct interaction with specialists in this field.

At the end of the meeting, Mrs. Rola Shehwan, Manager of the Studies Center thanked Mr. Freihat for her presence. Mrs. Shehwan expressed the Center's aspirations for further academic and research cooperation with Doha Institute for Higher Studies.