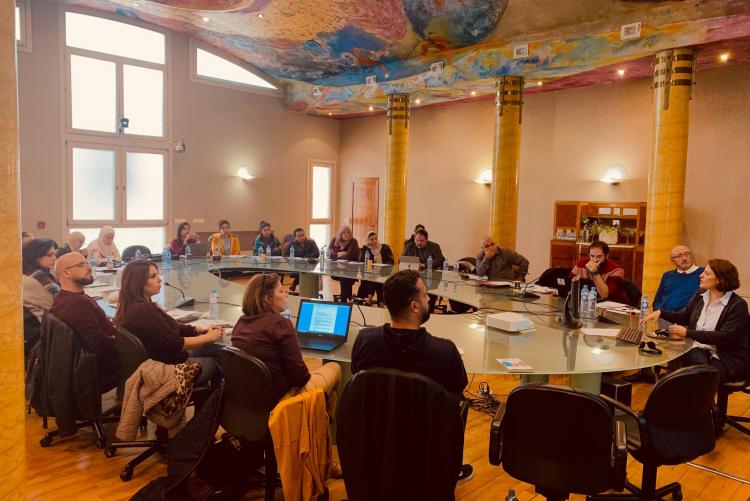 Representatives of the University of Granada welcomed the participant delegations and presented information about the different specializations and the research centers of their university. In addition, Dr. Enmacio Larotcha – the Head of the Euro-Arab Foundation presented introductory information about the foundation and the services it provides. Dr. Husni Mria talked about projects that are concerned with refugees, especially “Services for refugees that depend on the information technology and communication” project, that aims to design, develop, improve and distribute tools to challenge difficulties in the refugees merging.

Dr. Bablu Rodregus- representative of the Faculty of Political Sciences talked about the main researchers and professors in the university.

Dr. Nahid Habiballah- AAUP Professor in the Social and Humanitarian Sciences gave a lecture entitled “Historical Development of Conflict Resolution and Reconciliation concepts”, where she explained the different definitions of “Conflict”. In addition, she talked about the different forms of violence such as the direct violence in wars, the structural violence in rules and regulations and the cultural violence in the social equality.

Dr. Habiballah added: “Resolving a conflict does not include specific steps that can be followed to be achieved. Each and every conflict has its own interactions that need to be studied and analyzed. Despite this fact, this field has developed into a more clearly defined field that contains many elements about peace and reconciliation studies.”

Additionally, Dr. Habiballah explained that there is a problem in implementing conflict resolutions concepts, and we need to deal with conflicts as it is a sophisticated case that continued from the past to the present. We cannot understand a conflict without connecting it to the past and the future. Moreover, Dr. Nahid Habiballah asserted on dealing with conflict parties equally, and focused that reconciliation can be reached when living in a liberal community that guarantees cultural and political pluralism to achieve international community justice for all peoples.

Prof. Martin Lenr- the Head of Jena Center for Reconciliation Science Studies explained that conflict goes through different stages that can be positive or negative. He mentioned the game theory that contains the winning of one party and the losing for the other, or the winning of both parties or the losing for both. Prof. Lenr said that reconciliation is the only way to reach peace.

Dr. Borry Rabanda – a specialist in Gender Studies in the University of Granada presented a lecture at the end of the meeting. Her lecture was about women role in Conflict Resolutions and Peace. Dr. Rabanda explained the evolution of the global feminist movement and the global achievements for women in equality and conflict resolutions.

Students also participated in the discussion about how to manage and resolve conflicts especially concerning the Arab-Israeli conflict.